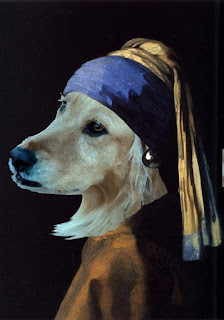 We woke up this morning to a beautiful layer of thick snow covering everything.  I let the dogs out at 3:30am and realized there would be a good chance that this would be a snow day.

The first one in my life!  Woot!

Of course, snow days are meant to be played in, and while I bundled up and hurried through morning chores, our pups had no issues with the chill.
Monty and Harlow are nicely equipped with thick fur coats - I'm pretty sure they don't feel the cold.  Ramble will run out in it, race once around the yard, and want  back in.  I can't blame him.  He doesn't always give me time to put a sweater on, so this morning our nekkid boy had to bravely face the elements.

He even managed to race around with Harlow and Monty!
Harlow and Monty found a new sport that they absolutely love - snow wrestling!  Which of course made them damp, and caused little snow balls to hang off of them - but they didn't care! 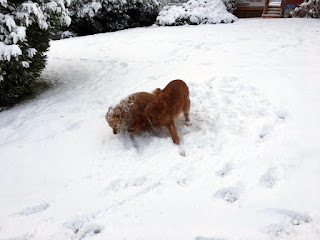 Of course, the fun doesn't end outside.  Once the pups have decided they have had enough, they need to be towel dried and have hundreds of snow balls removed... 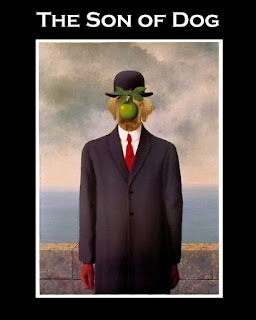