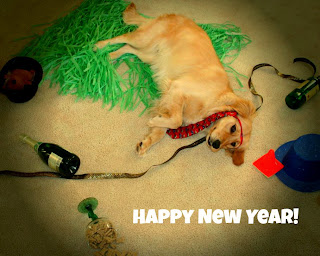 We wish all of our friends a wonderful New Year!

Monty, Harlow, Aaron and Christine
Posted by How Sam Sees It at 11:00 PM 33 comments:

Our Christmas - in photos... 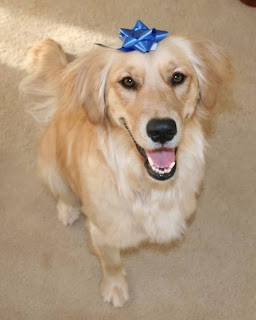 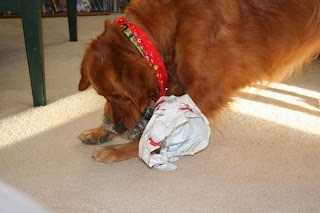 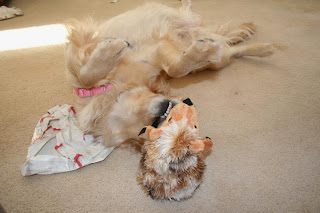 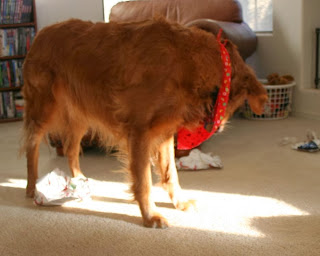 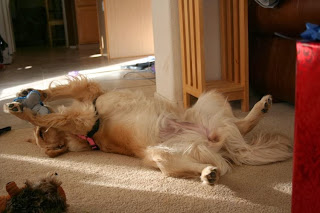 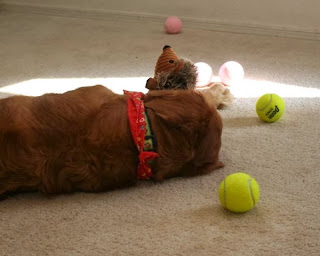 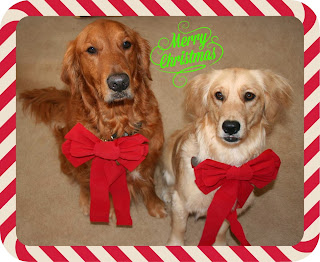 Getting ready for Santa...

Since I have a full week off, I decided to give our poor carpets some loving.  Keeping them clean with two overly active Golden's can be quite a chore...

First you have to move all the furniture...
...and then clean the carpets...
...and then wait for them to dry...
Of course, this would all go faster if I didn't have a certain pair of doggy helpers...
Posted by How Sam Sees It at 10:22 AM 21 comments:

Wordless Wednesday - A lesson in perspective... 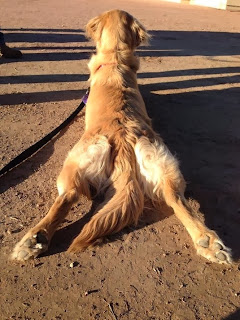 Anyone want to fill in for me today? 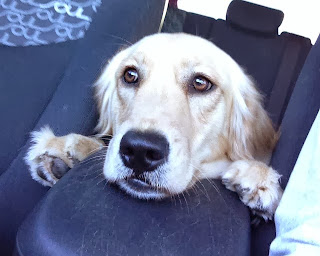 ...and now for something a little different...

If you find blue kibble baggies in your pups toy box, we know where it came from... 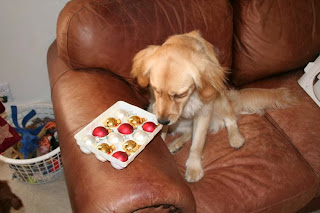 Yesterday we decided to take Monty and Harlow to the Holiday Pet Festival held at WestWorld in Scottsdale.  We loaded up the pups...

(I will apologize in advance for the poor picture quality.  I used my cell phone since it is easier to carry when pups are on leash.)

Note:  Monty wears a Halti due to his re-activeness to other dogs.  We can control his head better.  He only really acts up if a dog jumps in his face, but with so many dogs there we wanted to make sure he stayed a good boy.  Our plan was to use use Harlow as a buffer in groups of dogs while still letting Monty visit with people.  We didn't plan to stay long and we got there early to avoid the large crowd.

The best part of the whole day was seeing all the dogs and rescues.  Every table was either selling or giving things away, but we were there to look at pups!
There were two Weimaraner rescues there.  I think the photo above is the Tickled Pink Weimaraner Rescue.  The other one was Arizona Weimaranar Rescue.  Click on their link for a very silly Weim photo!  I thought of Sagira's mom...  :)

We thought these labs were mighty handsome. 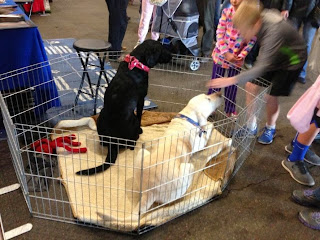 We really liked this big guy and tried to get a size comparison with Harlow... 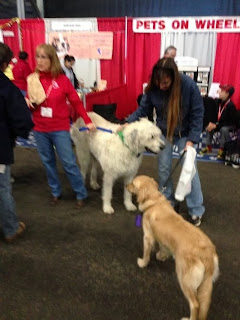 ...and Aaron really liked this little girl.  Her name was Foxy.  She was born with part of her rear paw missing.  Even though her leash says "Adopt Me", Aaron had the distinct impression that the guy holding her leash didn't want her to leave.  Hehe...  foster failure in full swing.
While we were there we stopped by AZGRC's booth. 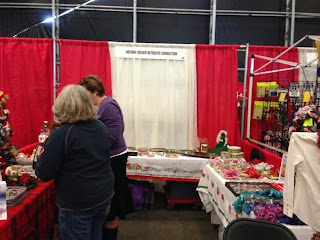 Where Harlow got some kisses from Auntie April:
Monty was mesmerized by this jingly pup...
I wonder what he was thinking?
On our way out we saw the cutest Minnie Mouse in a Santa suit ever... 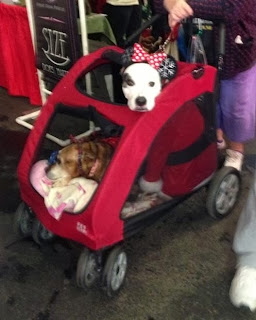 All in all it was a wonderful trip out with the pups.  We left with happy pups:
Which leads to tired pups....
Which leads to one happy Monty because he gets some peace and quiet.

In which we get cards... (Or, a conversation with Harlow...)

Me:  Look, Harlow, you and Monty have received a Christmas Card.
Me:  People send you cards to let you know they are thinking of you and wishing you joy and happiness at Christmas.
Me:  We hang them on the wall so that we can see them during the Holidays.
Me:  They add to the festivity of the season.
Me:  Harlow, aren't you listening?

Wordless Wednesday - The photo that won't be on our Christmas card this year... 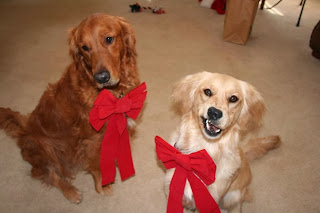 NaNoWriMo, the Dunes, and other updates...

November has been a very busy month for all of us!  I decided that this year I would successfully complete the NaNoWriMo challenge and I did!  50,000 words completed!  Woot!

It wasn't easy.  I traveled for a week to work at Grand Teton National Park, which put me behind on my writing.
Plus, tried to enjoy the cooler weather and get some riding in...
Plus, we needed to make sure the pups had some adventures!  Like going to the dunes for the first time...
Harlow made a new friend...
...and worked on her tan...
Monty worked on begging for treats...
Aaron got to play in the sand... 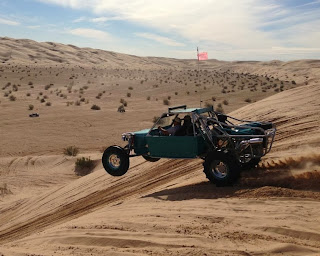 ...and so did I!
The pups were safe and sound back at camp - away from all the noise and cars.

I'm starting to catch up on blogs now and cleaning the house, but I did my usual mistake and marked all of them as read in Feedly...  sigh...  It is too easy to do that!
Posted by How Sam Sees It at 5:17 AM 19 comments: