Both Monty and Sam have picked up a stomach bug that has left them with the runs, and in Monty's case, one bout of vomiting. Originally it began with Monty over the weekend, and we assumed he had picked up something in the yard. After all, if it isn't nailed down he will try to eat it. Monty seemed to be fine by Sunday evening.

Yesterday, however, Sam started having issues. If you all remember, Sam has had a couple of episodes that has required him to stay at the vet for several days. We would desperately like to avoid that, especially since we are not sure Dr. Kerne has forgiven us for staging a daring jailbreak and busting him out the last time! Neither boy has a temperature, and the runs have been thankfully controllable with a few extra outside trips. We've also been picking our brains trying to think of what they might have gotten into. We've have thoroughly washed their dishes, and remain convinced that they found something in the yard.

As you can see, the boys barely have any strength to remain upright. 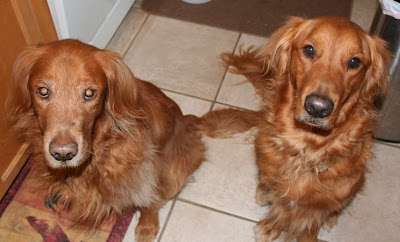 We've switched the boys over to the standard bland diet - lean ground beef and rice. This time we are also trying something new. I've heard so much about giving a few spoonfuls of pumpkin, that we picked up a can and have properly dosed the boys. Sam is in absolute doggy heaven - he is getting a variety of people food, which is his goal in life. We weren't sure Monty would eat the pumpkin, but found out he absolutely loves it!

It's the rice he is suspicious of! 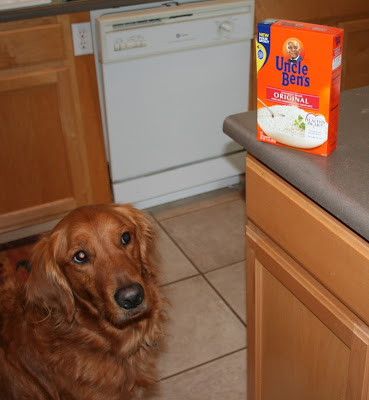 Dinner is served! Even though Monty is better, he is also getting the bland diet, although his is mixed with kibble.

Keep your paws crossed that Sam will be fine and we will be able to avoid a stay at the vet. For now, we are glad he still has his appetite! 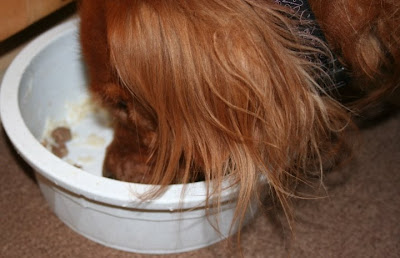