Friday night we noticed Harlow seemed a little off.  Typically she's about as bright as a pup can be, active, constantly following us or into something, but suddenly her wattage seemed a little dim.  She took treats from us, but didn't seem that interested in eating them.  Our first thought was that maybe the treats had gone stale.

Saturday morning she was still off, not interested in any food or treat and she vomited a few times.  I don't usually worry too much, having dogs all my life means I've seen my share of tummy aches, but I also had to weigh in that it was Saturday, the vet was only open a half day, and if this did progress to something a little worse, our only recourse would be the emergency vet.  We made the decision to take her in.
After taking a look at her, the vet decided it might not be a bad idea to take a few x-rays.  Harlow has a history of making bad decisions and tasting everything to see if its edible.  The vet was worried that she might have a foreign object causing her issues.  To our relief, her x-rays came back clear.

As an added bonus, since her hips were clearly visible in the x-rays, I asked the vet what she thought.  Harlow loves to lay "froggy" style, and we've been told that means her hips were shot.  The vet said the opposite and said Harlow had wonderful hips!

They kept Harlow for the day, giving her barium and waiting to see if her stomach cleared itself.  I was able to pick her up at 7pm.  She's on a strict diet of bland food, rice and ground beef.  Monty is also benefiting from her diet - how can you feed that to one and not the other one?  He gets his mixed with a little kibble.
She is feeling better, and her happiness has returned.  We've been letting her rest as much as possible.  Monty has taken her place as ranch dog, temporarily.  He tends to like to nibble on the ponies and challenge my "no dogs in the corral" rule.
I did try to do a more "artistic" photo shoot with the pups.  Monty is a little hard to take portraits of.  He's in love with the reflections from the camera lens and is easily distracted.
...but, Harlow is always ready to pose for a photo or two. 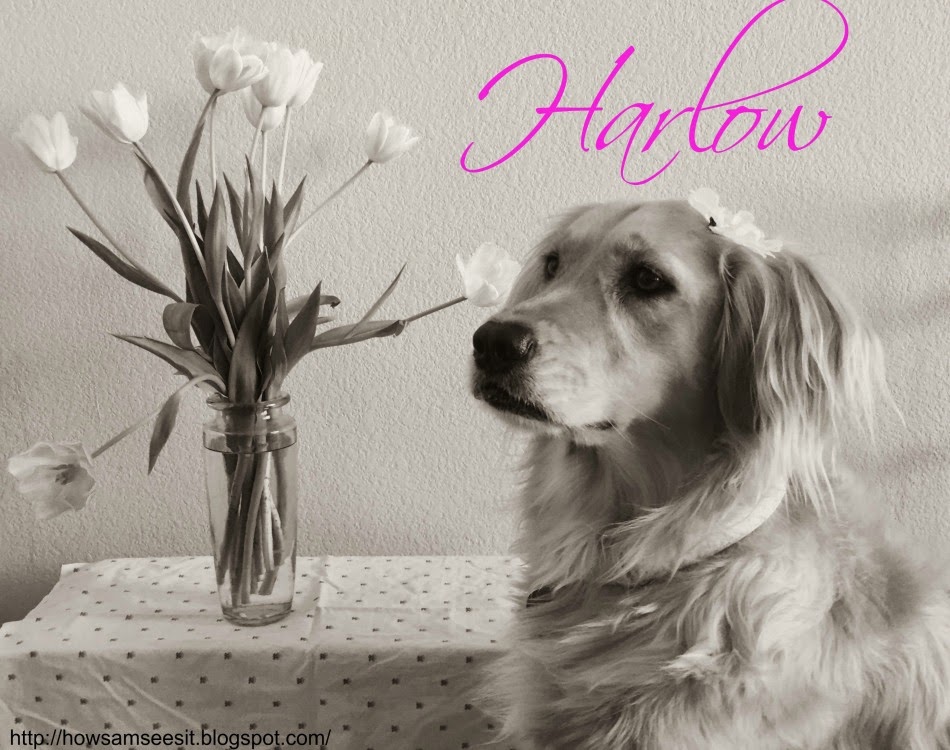