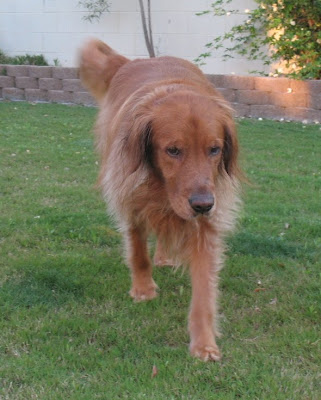 Sam had his stitches taken out on Friday. That is the good news! The little guy also has a problem with one of his ears. Aaron and I have been dosing him daily and thought his ear was looking so much better! We were really looking forward to getting him out of his t-shirt and getting him a b-a-t-h. However, Dr. Kerne obviously had a secret meeting with Sam and worked out a nefarious scheme to avoid bath time - she decided to pack his ears.

If you have never had this done with one of your fur-kids, it involves filling the ear canal with a very greasy, dense medicine. We really hope that it helps and takes care of Sam's problem. In the meantime, it has made Sam deaf. He missed us pouring food into his dish, which is a sound he loves! He missed barking at the neighbor Saturday morning when he put his trash out. ...and he is very jumpy! Of course, when greasy medicine becomes warm it also melts. As of this morning, Sam looks like we poured a bottle of cooking oil on his head. Of course, all Sam knows is that he hasn't gotten a bath, and he can't have one until after his recheck next Friday. He is quite okay with this.

I've taken quite a few pictures of Sam this morning, but the one above is the only one that doesn't show him completely in his current disheveled state. He really does not look like himself this morning.
Posted by How Sam Sees It at 6:34 AM

Labels: On The Mend, Sam, Vet