My pet goat, Whiskey, died last night.  An odd thing to mention, I know, on a dog blog, but Whiskey was part of our family. 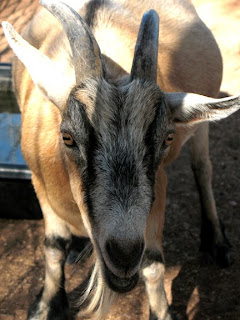 Whiskey was about ten years old, and had been a part of the family for a long time.  He was leash trained, which was always fun when you were taking the dogs for walks.  It nearly guaranteed that someone in a car would stop to do a double take.  He protected our small flock of chickens and ducks in his early days, and had quite a love affair with one duck in particular.  One of his most infamous moments was when our neighbors dog decided to jump a 6 foot chain link fence to go after the chickens.  My dad and I had to save the dog from Whiskey, who definitely was coming out the victor.  ﻿

Whiskey, named after Cactus Jack's horse in "The Villain", was a typical head-butting, mischevious goat.  He will be greatly missed.
Posted by How Sam Sees It at 11:24 AM