Hello all, Aaron here. Christine wanted me to mention that Sam has lost 7 lbs over the past month…You may recall that prior to his recent troubles Sam had been under vet’s orders to lose weight, and undoubtedly his ongoing illness has been a contributor to that loss; but I think his progress was admirable, even before this bout of Yorkie’s Revenge.

Thinking about that got me to looking closely at my Sam’s shaved belly this morning and I began to wonder if it bothered him, laying there on the cool tiles without a protective layer of fur…was he aware of how odd he looked with his pink skin on display? And once his morning walks resume will the other dogs make fun of him? Will they shout hurtful things like, “Hey Sam, uh, most guys go bald on top first!” or “Sam, uh, uh, nice pink belly ya got there!”

Dogs are often mean, but very seldom are they quick or clever.

I thought about how I might ease some of his embarrassment and hit upon an idea. So, after a trip to the garage for an old sheepskin seat cover, a couple of shoe strings and voila, I had it! The Tummy Toupee. 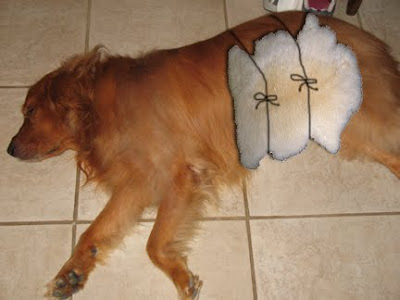 Looked pretty good I thought, could even have commercial possibilities. It’s warm, protective, only slightly unfashionable, and lacks vermin. An all around winner! Kind of like Ugg boots for your belly.

I began to have fantasies of financial independence, where late night Tummy Toupee infomercials become the stuff of legend and Hollywood stars are battling to appear in our life story, entitled:

Shave it again Sam, or How to be Hairless and Happy.

I saw Sam being played by Brad Pitt, with Wilfred Brimley taking my role.

Alas, it was not to be…Sam took offense to the whole concept and refused to play along, even when I suggested that instead of Brad Pitt and Wilfred Brimley, we go with Rupert Grint and Salma Hayek, respectively…sure, it would require a minor rewrite, but I felt it was doable. Sam still said no.

However, I’m not ready to give up on my dreams. Sam and I will capitalize on this opportunity somehow… 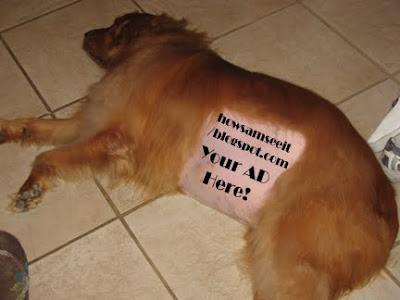 I wonder if GoldenPalace.com is still buying ad space?
Posted by How Sam Sees It at 2:14 PM