That is the good news. We had one very traumatic day. It started out with the "t" word, which pretty much caused both Aaron and I to panic - me a little worse. Even though Sam was eating all right and had no more blood in his poop, our vet could not stop the diarrhea. She called this morning to let me know she suspected a tumor in his intestines, and recommended we bring him for an ultra sound at the oncologist. She wasn't entirely sure this was the case, but wanted to rule it out as a possible suspect. It was a joy to see him again and to have him in the truck with us, although he smelled pretty rank after 5 days at the vet. We didn't care!

Sam was in heaven at the Oncologist, where he was reunited with his favorite vet tech Jenny. He also got to meet a new doctor, Dr. Jones. They kept him for an hour and did an ultrasound. To our relief the ultra sound came back clear. Talk about wanting to cry again! We were supposed to bring him back to our vet, but decided enough is enough. We brought Sam home. He still has the runs, but we have been supplied a variety of pills and such to give him along with a detailed menu. Sam will be eating better than us for the next week!

We still don't know why he has the runs, but both vets agree that with time his stomach and intestines may settle enough to solve the issues. I won't feel completely relieved until he is 100% better, but Aaron and I are both very happy to have our boy home again!

First off, Sam got a bath. He smelled terrible! Of course, he wasn't happy with the whole thing... 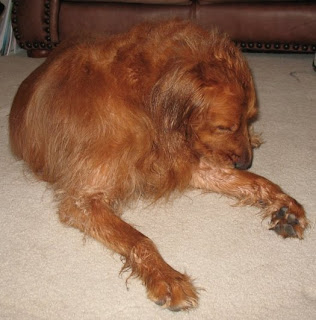 He then spent some time reuniting with the carpet! 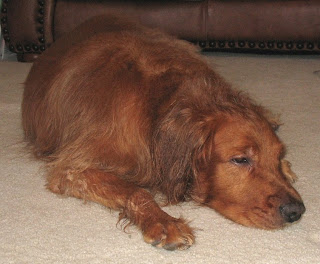 They shaved a rather larger patch of fuzz for his ultrasound! 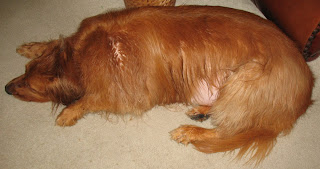 We are just happy to have him home! 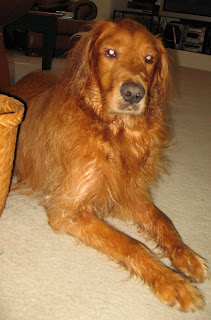