Sam knows that we all face difficulties during this economic downturn. But he doesn't believe that a larger, more intrusive government is the answer to these problems.

Sam has contained cost overruns within his home district for the last three consecutive quarters by reducing his reliance on store bought treats, and by taking walks within his own neighborhood, rather than driving to more distant parks. Sam feels that this kind of "out of the beltway" thinking is desperately needed in Washington.

A recent poll in his home district shows a 100% approval rating among all likely household voters. He also garners high praise for another of his major campaign issues, the Shuffling Undead: 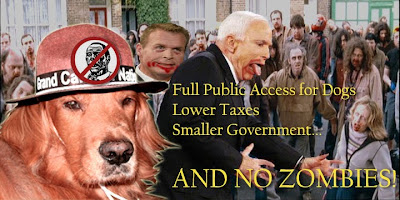 His position is clear:

"It's time for the voice of common sense to be heard! Send me to Washington so that I can chase the Zombies out!"


Paid for by the concerned citizens for zombie containment, "Sam! for Senate" committee.